ROMA by Alfonso Cuarón: a stunning vision in black and white

Roma by Alfonso Cuarón is his ultimate effort to turn his craft into the most intimate type of storytelling. It is definitely his riskiest effort ever, as he completely strips the movie off any kind of distraction other than contemplative silence, small but compelling details and an evergoing warm dialogue between each one of the characters and the audience. Finally, he pretty much succeeds in delivering both visible and hidden messages during two hours of pure beauty and longing imagery.

When I first watched the film on December 14, 2018, I had zero expectations about it. I thought that maybe it would be some pretentious art film interesting for some though not for me. The awards and recognitions the movie had already gotten did not impress me at all and with that particular mindset I watched it with my family.

I was totally wrong. In fact, it was a slightly shocking experience for several reasons. By the middle of the movie, I had drawn some conclusions:

1) Cuarón is obsessed with details, even those inevitably eschatological and involuntarily funny (yes, I mean El Borras).

2) Men are miserable in many ways.


However, saying this unfairly simplifies the film's meaning and value. For that reason, perhaps the first misconception about the movie is the story itself. Some people just don’t get it. They don’t even understand the true origin of the story: it is not a film meant to shock with expensive special effects or with an overblown though gorgeous kind of acting a-lá Gloria Swanson in Sunset Boulevard or Dolores Del Río in Bugambilia.

These two cinema legends did an extraordinary job, because their roles required it so: women living an endless drama that demanded a great dose of tears, frenzy and - in Swanson’s case - total madness.

However that was not what the director needed from Yalitza Aparicio, the pre-school teacher now turned into an actress, an international celebrity and Oscar nominee. The character had to be played in a substantially different way. So, what did she have to do to perform the most talked-about film role in recent years?

The dedication at the end of the film sets the record straight. Roma is not a product meant to delight the audience with endless action sequences or intense drama every 30 seconds. It isn’t even a protest movie. It is a tribute to one of the most important people in Alfonso Cuarón’s life. If Fred Zinnemann directed a two-hour poem to national pride and the value of friendship in From Here to Eternity, then the talented Mexican director produced a black and white ode dedicated to Libo, the maid and nanny who became his most treasured mother figure.

That's what Roma represents: a traditional story about Mexico in the 70s and its many faces, places and characters. Every artistic license was necessary to describre a period in Cuarón’s childhood living with Cleo, the name attributed to his nanny in the film. Therefore, the movie is a story of a specific period set in time, without any political or social pretension. Ironically, it has opened the dialogue about all this in a surprising way.

The film visually delights the crowd thanks to an impeccable cinematography and the long shots exuding nostalgia and showing the Insurgentes Avenue and Cine de las Americas in all its splendor, among other scenarios. For a few seconds, the Mexico City gets magnified before the audience’s very eyes and looks more gorgeous than ever, pollution free and full of hope.

The lovelessness in the times of Cleo and Sofía

Roma tells the romantic lives of Cleodegaria and Sofía (a mighty Marina de Tavira). When Sofía's holding tight her nonchalant husband (Fernando Grediaga), we’re just watching the way in which so many women in Mexico have clung far too long to a patriarchal figure for decades, even when this implies plain betrayal.

The marching band crossing the street at that moment underlines Sofia’s pain and her longing for things to be different. Does anyone in the audience remember that same expression on their mothers, sisters, aunts or grandmothers faces at some point in their lives?


Yalitza Aparicio, on the other hand, does an extraordinary job in a scene titled by the director himself as "The Abyss of Certainty". After Fermín’s neglect and treachery (Jorge Antonio Guerrero), without saying one single word, she perfectly embodies the pain of loss, the kind of loss that for a moment feels eternal. Or maybe this is just the way our mind also betrays our heart.

Later, Sofia closes full circle with an emblematic line: "it does not matter what they tell you, we are always alone". Maybe in the years ahead these images will be regarded as some of the most emblematic in all-time world cinema.

The age of the innocence

Within all the drama lived by the two women of different social class, Cuarón leaves enough space so the audience can  gloat over the purest elements of his film. Thus, the contrast of the poor and rich children (let’s wear out these terms once more) having fun, one with an expensive astronaut costume and the other, in Ciudad Neza wandering with a bucket on the head, unifies those two scenarios for art’s sake. For the innocent at heart, the only duty in this world is to be happy.

Cuarón knows how to show beauty in a very skillful way. A single detail, a single black and white sequence can makes us laugh while melting our hearts at the same time. After all, misery has not defeated innocence and abundance can also bring you some tenderness.


Somehow, and since the film is also a story about the human condition with no particular labels attached, there's a great contrast between such flashbacks of a Mexico that once existed and the reality shown in another masterpiece: Los Olvidados, by Luis Buñuel.

Buñuel produced a great movie that has transcended time, but whose severity leaves very little space for hope, only briefly displayed in the final part of the story. Roma, in contrast, seems to rub indulgence in the audience’s face right and left, thanks to the sweetest characters in the movie perfectly played by a young cast (Diego Cortina Autrey, Carlos Peralta, Marco Graf and Daniela Demesa) and Borras himself.

The pseudo-critics talking about a unskilled young Aparicio, conveniently ignore the climax of her performance during the most devastating segments of the film: when giving birth to her stillborn baby and when opening her heart on the beach in Veracruz to confess the stormiest of the secrets. This scene alone is worth a thousand awards. After all is said and done, what are we in this world without the ones who love us?

The dreadful hate speech recently targeting Yalitza in social media by both regular users and so-called famous people, means absolutely nothing before such performance. As happened with Lamberto Maggiorani in Ladri di Biciclette -the humble worker turned into an actor thanks to the magic of Vittorio De Sica- Aparicio finds her own place in film story with a role that will mark his life forever, whether or not she decides to pursue a major acting career.

The traumatic birth scene displays enough bitterness to shock and made the audience cry for a moment. Then it is not hard to explain why Aparicio’s natural talent has conquered both critics and a large part of a worldwide audience who fell in love with Cleo.

Cleo goes from shyness to a graphic and heartbreaking moment in the delivery room. In some moments, Aparicio’s performance reminds us of Florencia from Luis Mandoki’s Gaby, a True Story (1987), played by a superb Norma Leandro. The well-known Argentinian actress never spoke out loud during that film nor had hundreds of lines. Actually, she didn't catch the audience’s eye with an over-the-top performance. She did it by reaching their hearts with a calm, though warm and powerful performance.

Hence, most acting associations have gone crazy over Yalitza Aparicio’s performance. Of course, all that praise has translated into several nominations, but the rookie movie star shines beyond all those awards.

Roma in the XXI century

Alfonso Cuarón’s nostalgic 2-hour flashback is not exactly a political film per-sé, despite clear references to the then reigning corrupted party or the 1971 Corpus Christi bloodshed. The relevance of his work goes even beyond the dialogue about classism or the way domestic workers have been treated for decades in Mexico.

Of course, each and every one of those topics is very important. However, Roma is basically a look at the past and a love story. Since genuine love has no labels, the next generations will enjoy the story of a woman who, due to traditions, beliefs, social patterns and personal circumstances, shares her existence with the family who emotionally adopted her forever.

The plotline is actually pretty simple, but the form, full of details and pristine cinematography, produced a unique result. In this context, even the smallest details and closed shots work like a brief meditation exercise that is completely torn apart during the movie’s climax.

Roma was an extreme emotionally experience for me. It even reminded me of so many memories lost in my mind, some of which I needed to heal. I actually did while watching this gorgeous film, proving that art can be better than any therapy session.

It also reminded me of so many details about Mexico that we take for granted every day: the parents playing with their children at the park, or the little dog swinging their tail while lying beside a kid on the street, taking care of them as a best friend does. Even if Cuarón translated his deepest dreams into black and white sequences, Mexico burst into colors in every corner of every city full of people dreaming with the best of tomorrow.

And all those ideas, all those dreams are born again thanks to a film of great beauty that reminded me of a simpler world and childhood dreams. Let‘s call it then "the great sequence shot of our own existence".

So is it time to thank Alfonso Cuarón for that? Something tells me I'll have to do it. For now, we will appreciate the purest realism in black and white once again. 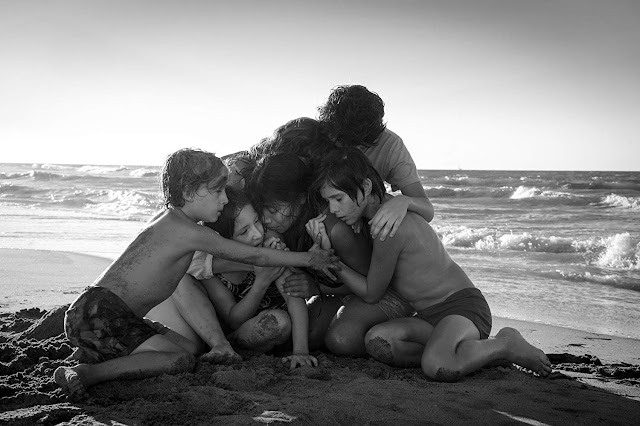