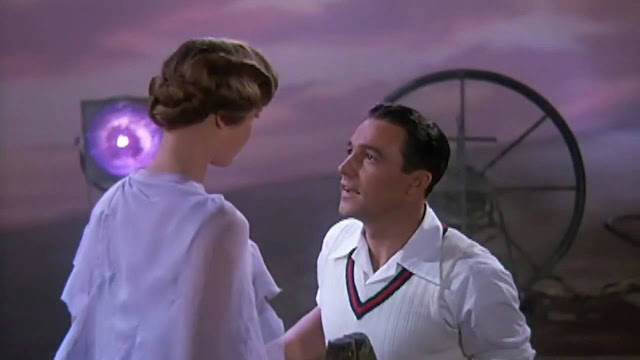 One of the greatest musical cinema moments of all time just took one big set, an amazing song and two legends together. It is from Singing in The Rain [1952] and the tune we are talking about is You Were Meant For Me, written by Nacio Herb Brown & Arthur Freed and originally published in 1929.

Gene Kelly and Debbie Reynolds created a one-of-a-kind atmosphere. Don and Kathy were getting closer and the mood was set for romance and love. Yes, there is some sultriness about this scene, but it never materializes completely. Instead, the two main characters really showed what being in love means.

The magic of dancing and the chance to be near of the one you have chosen, come together. Then, true love is born. Innocence replaces carnality, as Don just want to protect Kathy. There's nothing more important to him than becoming the man of her dreams.

The G-rated scene now looks so naïve, that its sweetness could lead to write one thousand poems. Today’s cinema might not believe in everlasting romantic relationships, but Kelly and Stanley Donen definitely bet on that possibility.

The Object of My Affection [1998] paid tribute (sort of) to this scene and song, when the two main characters played by Jennifer Anniston and Paul Rudd dance to “You Were Meant For Me” right before they tell each other the raw truth about their feelings. This is another great moment that might take you back to the original sequence, sans the heartbreaking aftermath... but the magic is still there.

Gene Kelly and Debbie Reynolds showed us that pure love is possible, at least on the big screen. Some of us still believe in that dream. And they say that now and then, dreams do come true.