Vincent D'Onofrio has a great passion for indie movies, which speaks a lot about his uncompromising work ethic and authenticity as an artist. To be honest, I'd rather meet Mr. D'Onofrio than most annoying pop or rock stars. There are a lot of questions on my mind related to his career. Interviewing him would be a dream come true for me. I think he's a great male role model, and I know I'd be paying attention to every single word and gesture if I had that chance.

As a hardcore cinephile, I'm glad there's such an extraordinary actor in a world where media makes believe that mainstream awards and inflated reviews measure an artist's real talent in any way, shape or form.

As an actor, D’Onofrio has a very unusual and fascinating characteristic: he’s not afraid of playing the most diverse roles, no matter how shocking or demanding they may be. After all, real life is full of good, bad, pleasant and awful things, every day, everywhere.

So are Vincent’s characters.


The nice boy next-door he played in Mystic Pizza (1988) gave no clue of what was to come. He's well known for his role in Law and Order: Criminal Intent as the majestic and complex Robert Goren, but there have been a lot of unforgettable characters in between. The talented actor who made Stanley Kubrick proud in Full Metal Jacket (1987) was also a perfect Robert Howard in The Whole Wide World.

Maybe any other actor would have settled for conventional leading roles as a ladies’ man, but he had a lot more in mind. He kept growing and then starred in The Cell as the disturbed Carl Rudolph Stargher. It wouldn’t be the last time for him to star in a film with such a dark storyline, so he became a serial killer again in Chained (2012). The violence depicted in this movie may confuse some people, but don’t take D’Onofrio’s choice of characters for granted: he knows exactly where he’s standing. 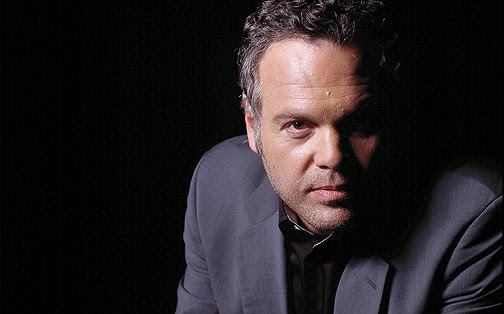 Why is he always looking for those unconventional challenging roles, the ones that even major names would turn down in a second? Easy answer: because he loves the risk involved in creating a new, strong, intricate character on screen.  Of course, Vincent loves to prove himself again and again that he's capable of doing anything, and most of the time the audience agrees with him. That’s why he's known as “The Human Chameleon” though this name doesn’t even begin to describe his immense talent. The man is indeed an actor’s actor.
Vincent D’Onofrio most interesting films include The Player (1992), Happy Accidents (2000), The Dangerous Lives of Altar Boys (2002) and Thumbsucker (2005). He has been a slayer, a priest, a mob boss and even a charming guy coming from the future on the big screen, but in real life, he’s a very reserved person living the life of his dreams with his family.

Fortunately for us, he’s still making movies and even directing some of them. His never-ending vision is going strong and he will continue delighting the audience with his amazing performances. People like him never stops and we are thankful for that. Long live real talent!